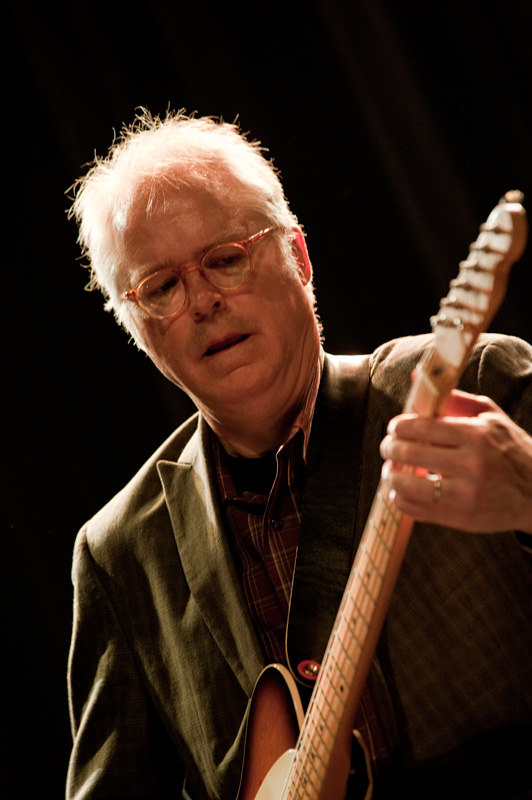 Bill Frisell calls violinist Jenny Scheinman, viola player Eyvind Kang and cellist Hank Roberts his ‘dream string section’ and on albums like 2011’s Sign of Life and 2013’s Big Sur you can hear why. There’s an elegant simplicity and a wonderful sense of flow to their music. The development feels so seamless and organic it’s as if the tunes are playing themselves and you’re left with the impression of a meeting of minds — of four musicians who know each other’s playing intimately.

On this, the first of two nights at Ronnie Scotts, they didn’t quite reach those dizzy heights. The great American guitarist seemed a little out of sorts – quieter than usual and reluctant to solo – but there was still plenty to enjoy about the set.

Frisell being Frisell, Americana was a prominent theme, established early with ‘This Land Is Your Land’ and ‘Pastures of Plenty’, tunes from a recent Woody Guthrie project. Opening with a small town country feel, the quartet sauntered into a lazy blues that peaked with a wonderful, bleary-eyed violin solo for Scheinman, full of yawning glissandi.

There was more from the American West in the second half, with the strings striding through ‘Going to California’ and the fat, surf rock groove of ‘The Big One’ (both tracks from Big Sur) before shootin’ the breeze in cowboy country with a rendition of ‘Verona’.

A brief foray into Wayne Shorter’s ‘Footprints’ was lifted by exploratory contributions from Kang, his slides between notes recalling the sound of the Chinese erhu fiddle, and a nostalgic amble through the theme from Bond film You Only Live Twice (set in Japan) brought further eastern inflections.

As for those fabled moments of interplay, they were there in the twisted bebop head of ‘Skippy’ and in the web of fragile guitar lines, murmuring pizzicato viola and rasping cello that prefaced ‘Blue in Green’ – a tantalising glimpse of what this electrified string quartet can do when they’re at their best.

“Armenian sacred music from the 5th century to the 20th century” – that reads like the title of an academic monograph – the kind of thing you’d toil over in the drafty corner of a university library, watching the night draw in and your chances of making that early morning essay deadline evaporate. It may well be, but it’s also the unassuming tagline of Luys i Luso (ECM), the latest album by young Armenian pianist Tigran Hamasyan, which is anything but dry and dusty.

Hamasyan’s longstanding interest in the sacred music of his homeland has led him to collaborate with the Yerevan State Chamber Choir and to arrange a series of Armenian hymns, cantos and sharakans (chants) by composers such as Komitas, Mesrop Mashtots and Grigor Narekatsi, for piano and voices. It makes for a profoundly atmospheric recording, but performed by Hamasyan and a pared-down touring choir of eight voices beneath the cavernous domed ceiling of Union Chapel in Islington the music sounded even better and more alive. Read the rest on Jazzwise.com

I’m writing this with one eye on an article about the world’s most stressed-out cities. We need more green spaces, apparently, but while we’re waiting I suggest we all listen to more Aaron Parks. The Brooklyn-based pianist has always had a tranquil side. You can hear it on his 2008 Blue Note debut, Invisible Cinema, released when he was just 24, and on Arborescence, his softly-lit solo recording for ECM. But at Kings Place on Wednesday night, backed by his new trio of bassist Ben Street and veteran drummer Billy Hart (a former sideman to Miles Davis and McCoy Tyner), Parks was sounding particularly Zen. Read the rest on jazzwisemagazine.com

Another for The Arts Desk’s We Made It column. This time: world-beating cheddar. Particularly enjoyed doing the research for this one!

Saxophonist Phil Meadows is nothing if not ambitious. In the 21-piece Engines Orchestra, he’s brought together the improvisers of the Phil Meadows Group with some of the best young musicians from London’s folk and classical music scenes. Earlier this year he led them to a win at the Parliamentary Jazz Awards and they’re now midway through a 10-date tour of the UK. But, with talk of charity status, outreach projects and new collaborations, it sounds like he’s just getting started.

On Thursday night we got a taster of what the future might look like, in the form of an Engines Orchestra variety show, with Meadows playing the role of compère and an army of photographers and managerial types scampering around organising and videoing the lot. A captivating set from vocalist/violinist Alice Zawadzki and pianist Elliot Galvin opened with ‘Low Sun; Lovely Pink Light’, a Zawadzki original with folkloric leanings, wordless lullaby vocals, fluttering violin and piano lines as fine as spider silk. ‘Beautiful Love’ ended with a sublime cadenza, juxtaposing classical poise with gutsy blues as the accompaniment sank into a black depression, and ‘Love For Sale’ was dark and licentious, shining a red light on the lyrics.

Read the rest on jazzwisemagazine.com